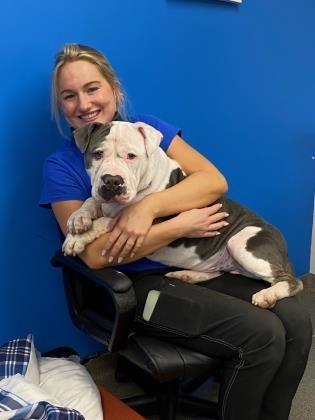 It wasn’t a surprise to see Gordo on someone’s lap, happy as can be. Or next to them on a bench outside during a walk. To Gordo, everyone at the Connecticut Humane Society was his best friend.

That will happen when you’re together for 168 days!

The 2-year-old’s skin was in such rough shape from allergies and infections when he arrived, that it would take months to get him looking like a regular dog again. Scabs were running rampant on his head, his neck, and his paws, and his ears were inflamed and painful. How soon would he feel relief? He heard you could live a life without constant discomfort, and wanted that ASAP.

It was going to take work on everybody’s part, including Gordo’s. He needed to be okay with a special diet (good thing he loved any and all food), sit nicely for soothing baths (okay, fine, as long as they were with his new pals), and take some medication (with a special cookie after? Sure.).

It’s all paid off because now when he rolls over, it’s not to itch his back—it’s to have someone pet him! And that’s exactly what he’s doing in his new home…when he isn’t snuggling on the couch, of course.