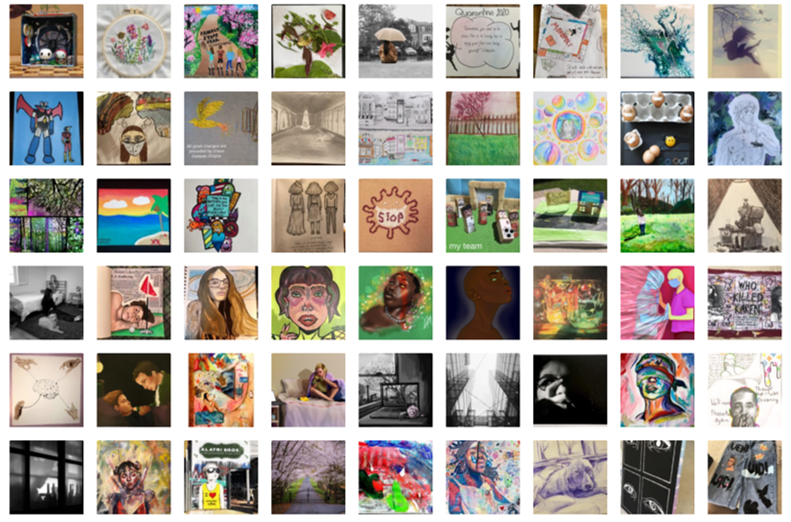 BlackRock Center for the Arts is a nonprofit cultural arts center located in the heart of Germantown in Upper Montgomery County, Maryland. BlackRock is home to two award-winning galleries, robust education and camp programs, and theaters that offer a wide range of live performances including music, theater, and film series.

BlackRock is more than a building for performing and visual arts. We believe that art has the power to connect us all and we encourage people of all ages to express themselves creatively. In April 2020, BlackRock felt it was important to provide our community’s youth with an opportunity to express themselves creatively and feel connected to each other through the arts during an extremely uncertain and difficult time.

In April 2020, BlackRock announced a call for young artists for a virtual art exhibit, “Quotable Quarantine,” to showcase the quarantine experiences of local students in grades K-12 during the COVID-19 pandemic. The original works of art were accompanied by quotations that captured the artists’ personal feelings and perceptions.

BlackRock created an online portal on its website for students to electronically submit applications, quotations, and photos of their artwork. BlackRock’s website was also the location for an online public voting poll, and ultimately the virtual exhibit, “Quotable Quarantine,” https://www.blackrockcenter.org/quotablequarantine.

The original works of art by 155 students were made in a variety of media including drawing, painting, photography, digital art, collage, oil, ink print, mixed media, sculpture, and contemporary craft. The top three works of art in four grade groups (K-2, 3-5, 6-8, 9-12) were selected through an online public voting poll by more than 1,300 people. Voters based their selections on the artworks’ interpretation of theme, creativity and originality, quality of artistic composition, and overall impression. In addition, awards were also granted to 41 pieces of art by BlackRock’s Leadership Team and the Art League of Germantown.

BlackRock held a well-attended online opening reception for the exhibit that was live streamed on its Facebook page and received more than 1,000 views. The reception was hosted by Art League of Germantown Board Chairman Thom Germer, BlackRock CEO Lynn Arndt, Artistic Director Keelyn Mitchell, Director of Education Katie Hecklinger, and Gallery Director Anne Burton, who announced the award-winning works of art.

“Quotable Quarantine” was featured on BlackRock’s website, shared on social media, and published in its weekly newsletter distributed to more than 10,00 subscribers.

We were incredibly impressed and moved by the artistry and words these students used to express their quarantine experience. Plans are already underway to display “Quotable Quarantine” in BlackRock’s award-winning galleries—the first exhibit that will be on view when BlackRock fully re-opens to the public.