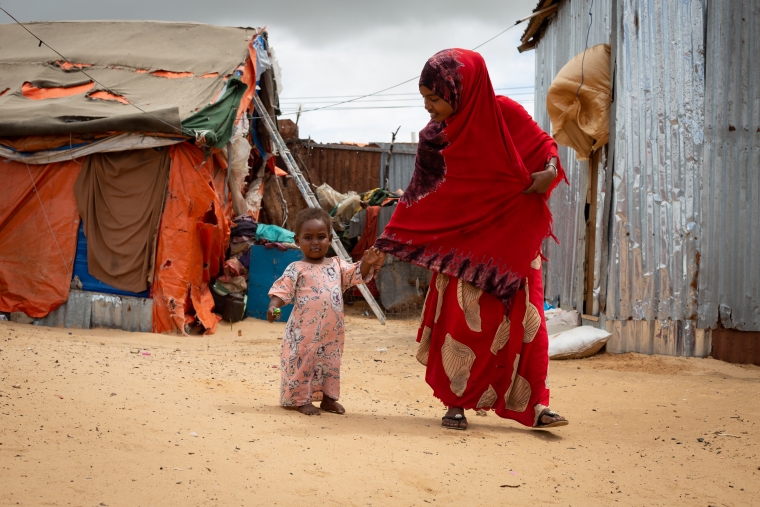 Fatuma* lives in Somalia, a country in crisis. Even before the COVID-19 pandemic, years of conflict, severe drought, deadly floods, and swarms of locusts left many Somalis without homes or land, and unable to feed their families. Orphaned at a young age, Fatuma’s life has become increasingly precarious. She lives in a camp for internally displaced people outside of Somalia’s capital city of Mogadishu.

Growing up, she moved from one relative’s home to another, until she met her husband Hassan when she was 16 years old. “He was a good man when I met him, or so I thought,” she says. Fatuma got married in December 2017 and quickly became pregnant. But it soon became clear that Hassan was not going to provide properly for the family, and he began to abuse his young wife verbally and physically. “After a while, I’d had enough. I wanted to leave the chaos behind, and I had to get away,” Fatuma says. Forced to leave her own children, Fatuma fled.

Powerless and full of fear for her daughter, who remained with her husband, Fatuma continued to beg for Halima’s return: “I was afraid as now that [Hassan] had full custody, Halima would be neglected and left to die of hunger.” Fatuma learned that Halima was suffering from diarrhea, but it was several weeks before Hassan finally brought her back. When he did, Fatuma saw that neglect and malnutrition had left her little girl’s hands and feet swollen, and inflamed patches on her skin had darkened and peeled. Her hair lost its color, became brittle, and started falling out. “Halima was in a bad state,” says Fatuma. “Her skin had turned black. You could tell she was in pain, she was not crying and she was moving her eyes silently. As a mother, I never thought I would see my daughter this sick.”

When Fatuma went to the pharmacy to buy medicine, she learned of a Health and Nutrition Center supported by Action Against Hunger that could help her daughter. She went there the next day and Halima was immediately diagnosed with the deadliest form of hunger - severe acute malnutrition - and admitted for treatment.

Under our team’s expert care over several weeks, Halima began to recover her health. She was treated with therapeutic milk and our staff advised Fatuma on the best ways to feed Halima and maintain good hygiene practices. Once she was healthy enough to return home, Fatuma continued to treat her daughter using ready-to-use therapeutic food. This peanut paste contains all of the calories, vitamins, and minerals Halima will need to fully recover. Fatuma visited the health center each week to collect treatment packets, and an Action Against Hunger community health worker visited the family regularly to check in on Halima’s health. As Halima recovered, Fatuma began to receive monthly cash transfers from Action Against Hunger to help her provide nutritious food for her children. After weeks of treatment at home, Halima was healthy once more. Fatuma is happy to see her child healthy again, and determined to create a brighter future for herself and her family: When she grows up, I want her to go to school. I want her to have a better life than the one we live in now.

But still, challenges remained for Fatuma and her children. Three months after her daughter recovered her health, her ex-husband Hassan came back to demand custody of their children. Fatuma went to court. She presented “before and after” photos of her children taken by Action Against Hunger’s Somalia Communications Manager, Fardosa Hussein, as evidence that Halima and Mohamed are healthy and safe in her care. To her great relief, she was granted full custody of her children with support from the community elders and her uncle.

Today, months later, it is hard to tell that Halima was ever malnourished. She walks, plays, and laughs like any other two-year-old child. “I want to thank all the health care workers who have treated and taken care of my child. Thank you,” says Fatuma. “I want also to thank the staff of the organization [Action Against Hunger]. They’ve been in contact with me and they’ve followed up on my daughter’s health throughout. I feel very happy. I remember how sick she was then, and how healthy she is now, and I am so grateful.”