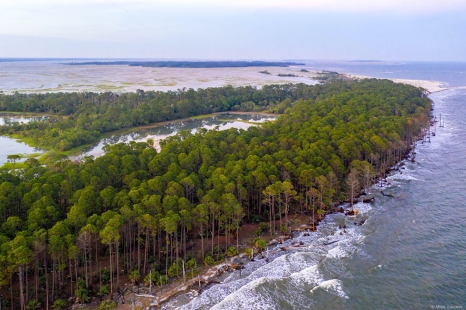 Remote Bay Point Island, located off the coast of Beaufort County, South Carolina, is buffered by vast and near-pristine marshes. This habitat plays host to countless bivalves, crustaceans, fish, and more, providing sustenance for both the mind and body. The local Gullah/Geechee communities have relied on these bountiful ecosystems to feed their families for generations, fishing and crabbing on Bay Point’s oceanfront, and harvesting shrimp and oyster from its marshes.

The Conservation League wants to make sure Bay Point remains that way, so we’re working with concerned citizens and the local Gullah/Geechee community to fight a proposed “eco-resort” from being built there. The developers are asking the Beaufort County Zoning Board of Appeals for a permit to move forward with the resort. Despite the eco-elements proposed in the plan, the resort would nonetheless cause significant harm to the people and wildlife that call the area home. Allowing this resort could open the floodgates for more destructive development on our coast in the future, setting a dangerous precedent.

Building a resort on a barrier island vulnerable to sea level rise and increasing storm frequency would be irresponsible and short sighted. The resort and accompanying development would alienate residential Gullah/Geechee communities, such as those on nearby St. Helena Island, from a place they’ve long relied on. Bay Point and St. Phillips are Sea Islands located in the heart of the Gullah Geechee Cultural Heritage Corridor, which extends from Wilmington, North Carolina to Jacksonville, Florida and is still home to many Gullah/Geechee communities today.

Not only would this development harm local communities, but it would also entail significant destruction of Bay Point’s habitat and the wildlife that it supports. The resort’s construction would introduce stormwater, chemical, and wastewater run-off—contaminants that would cause abrupt damage to Bay Point’s marshes and oceanfront. This is especially concerning, considering that the National Audubon Society has designated Bay Point Island as an Important Bird Area. These areas provide essential benefits for bird populations. Bay Point can accommodate as many as 8,000 shorebirds, mainly due to the current lack of human disturbance. In addition, 107 loggerhead sea turtle nests were recorded there in 2019. Even a small-scale disturbance could be devastating to these species, and the scope of the proposed resort would no doubt permanently damage these important nesting grounds.

The Conservation League is working with partners, elected officials, and the community to stop the development, and advocate for permanent protection of this special place. This summer, we have been helping mobilize public opposition with letter writing campaigns, social media, yard signs, and a Change.org petition (www.change.org/p/beaufort-county-council-stop-bay-point-destructionment…) started by Queen Quet, Chieftess of the Gullah/Geechee Nation. As of August 2020, the petition has over 25,000 signatures. Recently, state leaders, including Governor Henry McMaster, have spoken out against the proposed development, and have urged the Zoning Board of Appeals to oppose the eco-resort and keep the island in its natural state.

For more information about this and other efforts, please visit our website at www.coastalconservationleague.org. Thank you so much for your support of this timely and important work.