No Small Thing: Improved Care for Newborns in Sierra Leone 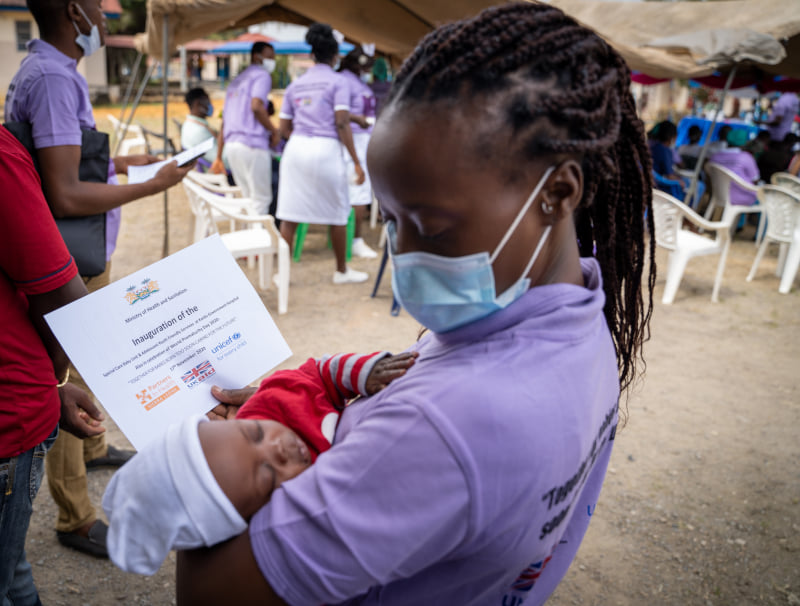 Fourteen weeks ahead of his due date, Naphtal was unexpectedly delivered on a rural farm on the edge of Kono District, Sierra Leone, miles away from any health facility. He and his mother, who were in dire condition after a complicated, unattended birth, were rushed by ambulance to Koidu Government Hospital, Kono’s only hospital. None of the family’s neighbors, who had scrambled to call for help, thought that Naphtal would survive: He weighed less than two pounds, and without intensive, specialized neonatal care—care that had never existed in the rural, impoverished district, even at the highest-level health facility—loss seemed certain.

But all was not lost. Mere weeks prior, Koidu Government Hospital (KGH), which Partners In Health supports, had started a new Special Care Baby Unit: a dedicated neonatal ward stocked with the specialized equipment clinicians long needed to adequately care for infants born prematurely or with complications at birth. “Baby Naphtal was in bad condition when he arrived at the hospital,” said Dr. Napthal Nyirimanzi, lead pediatrician at KGH. “Without the Special Care Baby Unit, we were not able to save any premature baby weighing less than two pounds,” Nyirimanzi said. “But we believed with the new facility, we could save this child.”

Opened in May by Sierra Leone’s Ministry of Health &amp; Sanitation, in partnership with PIH and UNICEF, the Special Care Baby Unit provides care one level below that of a neonatal intensive care unit. Clinicians now have access to advanced medical supplies and equipment, from infant warmers and phototherapy lamps to vital sign monitors and emergency medications.

These new resources and protocols are tackling major barriers to saving at-risk infants. And they have helped keep newborns like Naphtal alive. “Naphtal needed all the care extremely premature babies need to survive: oxygen support, infection prevention and control, antibiotics, temperature control,” Nyirimanzi said. Part and parcel with advancing care for vulnerable newborns, the Special Care Baby Unit prioritizes mothers as well. The unit provides an attached ward for mothers, allowing them to stay close to their babies round the clock without having to endure a long and costly commute between the hospital and home.

As is often the tragic, preventable case in Sierra Leone—a country with one of the world’s highest maternal mortality rates—Naphtal’s mother did not survive childbirth, due to chronic health conditions. His father was also in poor health and passed away soon after her death, leaving Naphtal orphaned by just one month old. The parents barely met their son and did not live long enough to give him a name. Hospital staff searched for Naphtal’s relatives but found no one able to adopt him due to the injustice of extreme poverty. The hospital staff gave him a name: Naphtal, after Nyirimanzi, one of his primary caregivers and among the clinicians who had saved his life.

And another clinician emerged as a mother figure: Kadija Wurie Jalloh, a nurse in the unit. Even on her days off from the hospital, Jalloh came to the Special Care Baby Unit and sat in the rocking chairs, holding Naphtal against her chest. She provided one of the blood transfusions that kept him alive. And she took him to receive his first vaccinations at the hospital’s under-5 clinic. After five months in the Special Care Baby Unit, Jalloh took him home, vowing to care for him as her own unless a biological relative came forward. “I love him so much,” she said. Today, Naphtal is seven months old—small for his age, but healthy and continuing to grow.

Since the unit’s opening, KGH has seen its neonatal mortality rate decline rapidly. In September 2019, 13.8% of the hospital’s babies less than one month old died. By September 2020, just four months after the unit opened, that rate had dropped to 6.8%—a 51% reduction. The Special Care Baby Unit’s opening comes as part of larger improvements to pediatric and maternal care at KGH. And PIH and the Ministry of Health have announced plans to build the Maternal Center of Excellence—an innovative, world-class maternal health center that will include a neonatal intensive care unit. “The journey is long and we are still far from the ideal, but what matters is that we continue these steps toward improving maternal, neonatal, and child health,” Nyirimanzi said. “With the Special Care Baby Unit, we are on the right track.”