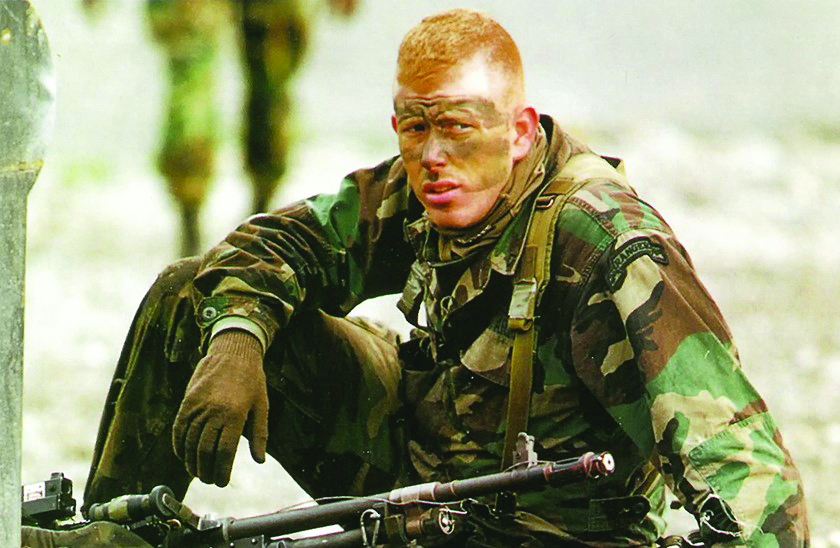 Nick is a living example of how the strains of defending our country led to his arthritis.

For 1 in 4 Americans, arthritis pain is a part of everyday life. Pain is with them as they wake up. It interferes with even simple activities like getting dressed or preparing a meal. It disrupts sleep — and in many cases it is debilitating, preventing people from doing what they love and living the lives they want. And while arthritis still is commonly seen as a condition that affects older people, the truth is that two-thirds of those affected are younger than 65 — not including the 300,000 children who have arthritis.

The Arthritis Foundation is putting a spotlight on people who live with pain from arthritis and how they are striving to get a grip on their arthritis.
One Patriot’s Price

Nick Steen is one such person. An Army veteran and dad to a teenager who has juvenile arthritis, Steen’s body took a pounding when he was in the elite “Special Ops,” and he has paid a price with severe pain from osteoarthritis (OA).

Steen joined the Army right out of high school in 1994 and served as an airborne infantryman in the 2nd Ranger battalion.

“My primary job in the Army was that of a heavy machine gunner, which meant I was either carrying a 30-pound gun or approximately 600 rounds of ammunition that often weighed over 50 pounds in addition to the normal load. As you can imagine, jumping out of airplanes with this type of weight often made me turn into an anchor as I crashed to the ground,” he says.
Steen sustained injuries, too, including a broken collarbone and a shattered ankle. “I served my country proudly and would do it again,” he says. “My concern is that my choices to help keep this country safe have now caught up to me [in the form of] the osteoarthritis that I have been diagnosed with.”

OA affects almost every joint, from his shoulders to his ankles. “My back, knees, ankles and feet are often in pain as I do my normal activities,” he says.
A Father’s Fight

Despite the pain, he tried to ignore his OA, viewing it as a sign of weakness. “For a while, I even refused to take the pills prescribed by the VA to treat my pain,” he says.

“But that all changed for me when my daughter was just 18 months old and her doctor diagnosed her with juvenile idiopathic arthritis. All the sudden, arthritis was a part of my family’s story in a brand-new way,” Steen recalls. “In sharing my experience with my daughter, my partner in this journey, I have come to learn that this disease is not a sign of weakness. This disease does not care who you are or what you’ve done.”

Now Steen strives to stay physically active and participates in CrossFit training, which he says has helped manage his OA pain. He’s also become more outspoken in his fight against arthritis.
Seeing his now-teenaged daughter’s struggles and acknowledging his own pain spurred Steen to speak out. He shares his story to bring the disease out of the shadows and help others like them – including 1 in 3 servicemen and women who have arthritis – get a grip on arthritis pain.
“There is no cure for arthritis, only pain and inflammation management,” he says. New, more effective and longer-lasting therapies that improve pain management are urgently needed.

Charity Name
Arthritis Foundation
Photo Caption
An Army veteran and dad to a teenager who has juvenile arthritis, Steen’s body took a pounding when he was in the elite “Special Ops,” and he has paid a price with severe pain from osteoarthritis (OA).
Photo Credit
n/a