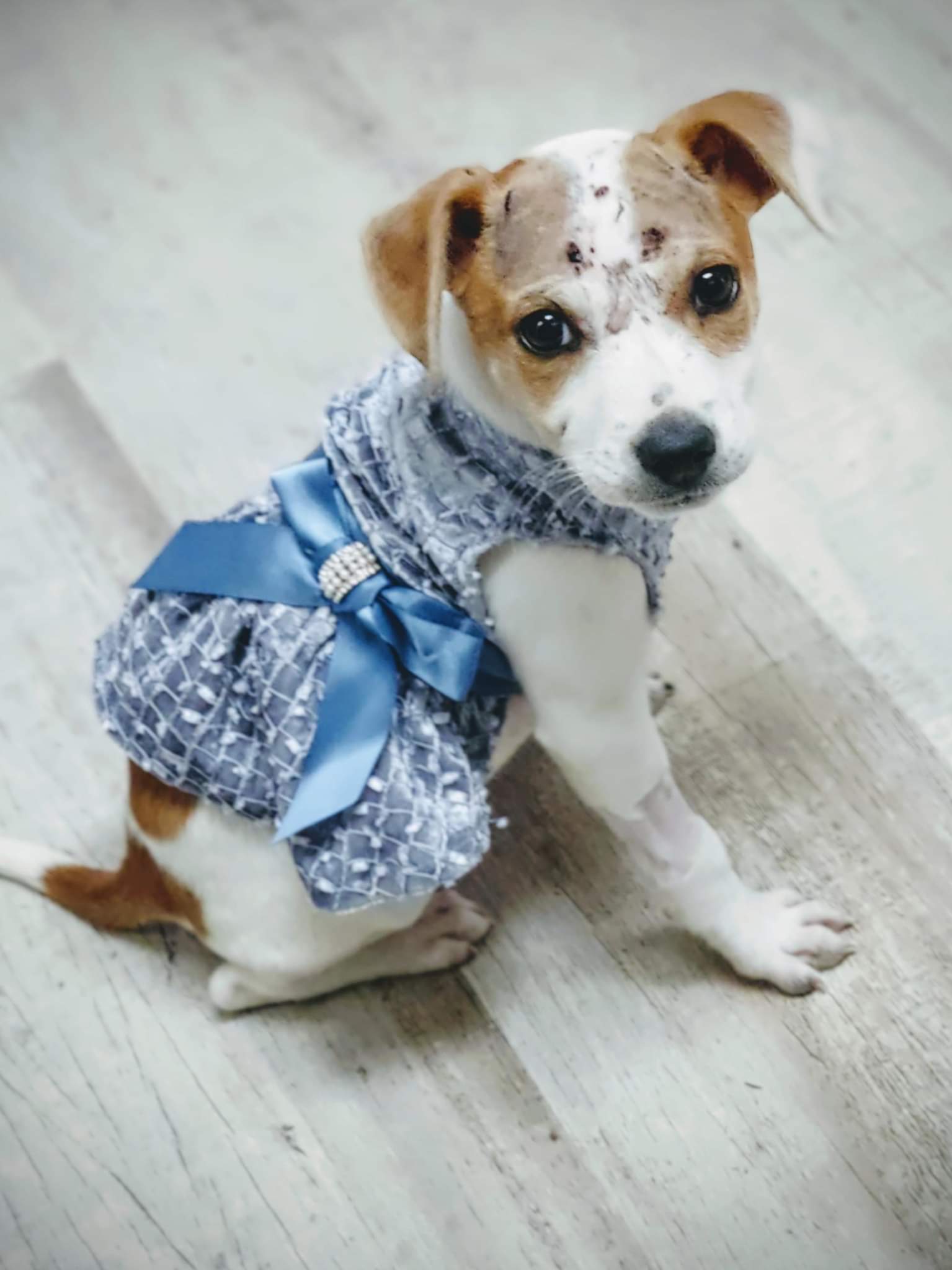 In August of 2021, the Dog Program Manager at Second Chance Pet Adoptions, Laura, learned of a family whose dogs were living in awful conditions outside and were about to be listed as free on the internet. The family had attempted to surrender the dogs to a local county shelter, but the overcrowded rural shelter refused their entry, saying that they were no longer accepting owner-surrendered animals due to the still-raging COVID-19 pandemic. Swimming in mud and bearing a multitude of scars (one with a serious chemical burn down the length of his spine), 8 puppies and three adults (including the puppies’ mom and dad) desperately needed help.

Among them was the baby girl we now know as Megan Rapinoe. After being wounded on her head (it is our suspicion that another dog on the property attacked her, but the family would not confirm the origin of the wounds) and failing to receive medical care, her small head was misshapen by a large abscess. While the other 7 puppies and the adults came to the adoption center for extensive bathing and medical assessments, Megan was rushed straight to the veterinary hospital to get treatment for the infection.

The staff at the vet hospital placed drains in Megan’s head and all seemed to be going well, even after the drains were removed a couple days later. And then, suddenly... Megan crashed in her foster home. She was rushed back to the vet hospital again and tested positive for parvo, which can be fatal for puppies. The whole gang were put on parvo alert and Megan began receiving quality medical care to restore her energy, nutrition, and hydration.

After a few nights in the hospital, Megan won the battle against her illness. (None of the others broke with parvo or anything else, thankfully.) In just the first 8 weeks of her life, this wee gal has been through a lot! But she's been courageous and generally happy and spunky, and before long, she will be spayed and microchipped (she has been receiving vaccinations as well, of course) and will find her forever family.

In North Carolina, many county shelters are overburdened and underfunded, and where they are unable to provide the care that animals need, no-kill rescues like Second Chance Pet Adoptions step in to fill the gap. The animals in our program are given a second chance to find love thanks to all who donate supplies and funds so we can provide safe shelter, nutritious food, and quality medical care to those awaiting adoption. Because of our donors, Megan Rapinoe, her siblings, and all her friends here at Second Chance will live long, happy lives with their forever families.