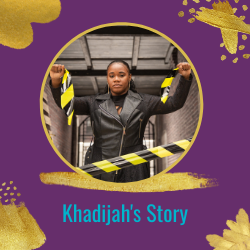 It was young love, and it felt exciting. Looking back, there were red flags early on, but I didn’t see them at the time. He didn’t want me to hang out with my friends or family. He wanted to be around me at every point and time. Little did I know then, that the control was just beginning. I moved in with him, against the wishes of my loved ones. I thought life would be great, so it didn’t matter that I dropped out of high school without my diploma.
But he became more and more controlling. My dreams and goals became completely nonexistent. I could no longer become a nurse or a police officer. I didn’t have a degree, and his insults built up so much that I began believing they were true.
I became pregnant for a third time after two miscarriages. What started as the happiest moment of my life would quickly turn to sadness in a few months. He insisted the baby was not his, and verbally abused me.
I was so alone. I didn’t have a cell phone back then, and he would take the landline phone chord with him when he left the apartment. He wouldn’t give me a set of keys to our home, and the door locked automatically, so I literally couldn’t leave without him. I had no independence. He’d even accompany me to my job and sit there throughout my entire shift to keep an eye on me.
He’d always turn on the charm when one of my sisters stopped by for an unexpected visit. And he made sure we looked like the perfect couple when we were around his family and friends.
I finally gave birth to a baby, but she was born prematurely, so I spent a lot of time in the NICU. I stayed in the hospital as much as possible, and one of our nurses soon noticed the dynamic between me and my partner. When she spotted the bruises that I tried to cover up, she told him that I had to spend the night in the hospital to breastfeed the baby, and she’d often fabricate “mommy and me” times at the hospital to keep him away. She became a source of support for me, and we are still close to this day.
He was arrested for domestic violence after a particularly bad fight at our apartment, when my neighbor heard the screaming and called 9-1-1. Once he was released on bail, he kicked my neighbor’s door down and threatened to kill her if she ever called the police again. I was so tired of living with his volatility. I realized this was going to end with one of us being killed, and it couldn’t be me. I had so much more to live for. So I made the best decision of my life and I moved out. I gained the courage to leave, and we lived with my mom until I was able to move into an apartment of my own, with the help of Women Against Abuse.
My mom worked for Family Court, so she had me immediately file for a Protection from Abuse Order. The Women Against Abuse Legal Center represented me, and I was granted the protection order. They also helped me win full custody of my child.
Today, I am a strong and empowered survivor. My children are thriving, and I’m beginning a first-time homebuyer’s program as I plan for our future. I am the current reigning 2019’s National Miss All American Diva Mrs., and am using my platform to advocate for survivors of domestic violence, as well as autism awareness.
I earned my high school diploma in March 2018, and was granted the opportunity to walk the stage in the city-wide adult education graduation for the City of Philadelphia. I am currently enrolled in college, earning a bachelor’s of science in criminal justice with a concentration in criminal crime and behavior. I’ve been married for eight years now, and have four amazing, beautiful children. I am living my best life.