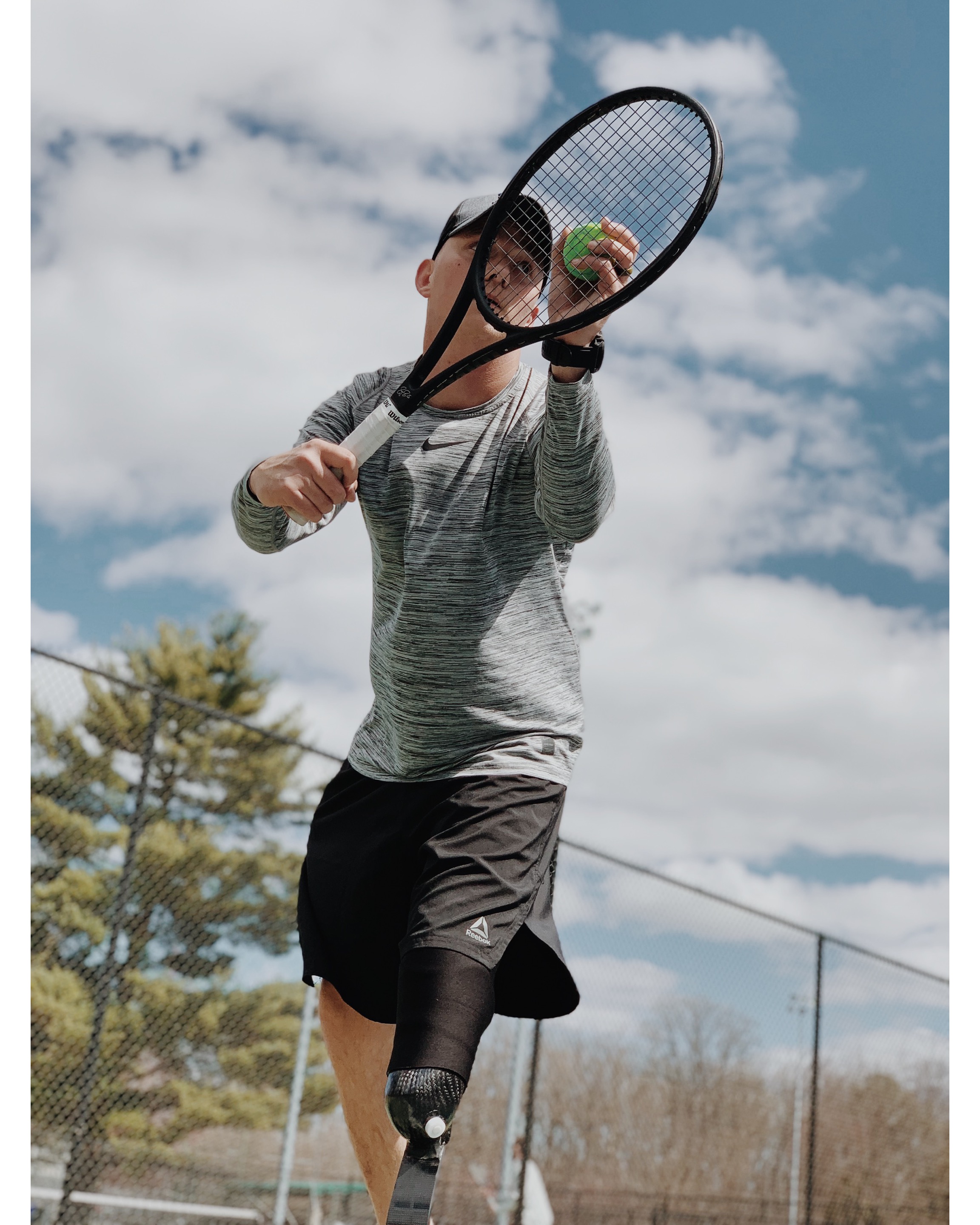 I thought I had it all planned out, but funny how those plans can vanish in a moment, or a flash. I started playing tennis when I was 5 years old in Annapolis, MD. I trained at Sports Fit, Severn Valley, the Brigade Sports Complex and The Annapolis Area Christian School. I was a rising national junior player out of Severna Park, Maryland slugging it out through the USTA tournament pathway, playing the local junior tournaments, doing the four day regionals, and I even played the “Zoo”, making it to the 4th round. That’s the Kalamazoo tournament, the highest level amateur tennis tournament in America. By 2008 I was ranked #16 in Maryland, #48 in the Mid Atlantic Division and #248 in the US. In my mind, and that of my father, I was on the road to becoming a pro tennis player.

Even though I was offered a full scholarship to Ohio State University, I chose the Marine Corps because I wasn’t ready for college and wanted to really challenge myself in a different way. My father, a multiple Phd. educated man, wanted and expected me to continue on my road through college, but I needed to set my own path, after seeing the road to “being a pro” set before me. I wasn’t at the top of the international ranks, even though I was one of the best in the nation. I really questioned if I was even going to make to the pro ranks. Deep within, I knew that had to form my life in my own way.

How I lost my leg. A definition of SNAFU. In February of 2011 we were training in Camp Geiger, North Carolina, slogging a 20k hike in night conditions. I didn’t see the hole that trapped my left leg. The darkness enveloped me. Like a “grunt”, I thought I just needed to suck it up and soldier on, but it hurt like hell. At the infirmary, it was diagnosed as plantar fasciitis, a soft tissue injury, so I rolled a soda can on the bottom of my foot for three years, waiting for the pain to subside. The symptoms increased steadily, until 2016 when I could no longer walk, I couldn’t get through the pain that tore through my body with each step of agony. I had a radiograph preformed and a broken navicular ( heel) bone was discovered. During the five years of waiting, the heel had undergone navicular necrosis. On August 2016, I received a surgery to extend the calf muscle of my left leg and had a bone transplant from the ilium of the hip. At this point I was relegated to movement on a knee scooter.

It was in May 2017 when I heard of this group in Maryland offering tennis instruction to the veterans. I didn’t want to give up the sport, that was so much a part of me, tennis was ingrained as part of my identity. With or without a leg, I was still a tennis player. I just had to find out if I still had it.
On the courts of Kentlands, was where I met Coach Karl Lee, the founder of Wounded Warrior Tennis ( https://iambearlee.wixsite.com/website-2wwt). He was a certified USPTA tennis coach, but before that role, he was a dentist and had his office in the area. One of his patients was involved in the “Gerryhattricks” hockey program for injured military veterans. Coach Lee inquired if there was a similar program created for tennis, and when he heard that there wasn’t a tennis training institution, he decided to form one himself. I looked around at the motley crew that came out to hit, Stephanie- missing a leg, Bryce - our adaptive athletic coordinator- limited use of his legs, Paul- shrapnel wounds to his wrist and elbow, Ron- some sort of impairment, and me- on a kneeboard, wielding a tennis racquet, and wheeling around on the court. We may not have seemed like tennis players, but I can tell you that we would try like hell. For my part, I didn’t want to be harnessed to a chair. I aimed to adapt to my amputation below the knee and fitted with a prothesis. I wanted to be a fully mobile player, at least that’s how I pictured it in my mind.

The first few swings were rough, I won’t lie about that. I whiffed on a few, and shanked a few more. Still I was back on the court, I was hitting, certainly not like before my service, but I was on a court and in my element.
You couldn’t wipe the smile off of my face in a million years.

Coach Lee knows how to push me to my potential, with a mixture of patience, analysis and advice. He had me do a drill were he was serving on the service line and I had to return the ball the best I could. The ball seemed like it was flying off of his racquet, but I still had to read, react and drive the ball to a target. It was only after I had shown some sort of success , that he then moved his position to the baseline. From there, it seemed like I had all the time in the world. His teaching method is much different than most other coaches but it works with me the best. In another drill, the emphasis was on the early prep, the drop and drive, for picking the ball up just after the bounce to take time and space away from the opponent. He stood only about 5 feet away from me and bounced balls to my forehand and backhand side. As quick as I could, I would react to the ball, prep my shot, fire it down the line and recover for the next one. It was a brutal drill, but it made me not even think about my leg, as I just had to react, trusting my body to follow my lead. Some of the drills were for tennis, and some were for “trust”.

Where to now? Onward and Upwards. I now know this pathway is much bigger than for just one player from Severna Park. This is about leading others to realize what is within themselves. “Quit” does not exist. I am selected to represent my country in the 2020 Paralympic Games in Tokyo, Japan. We have a lot more training to do.